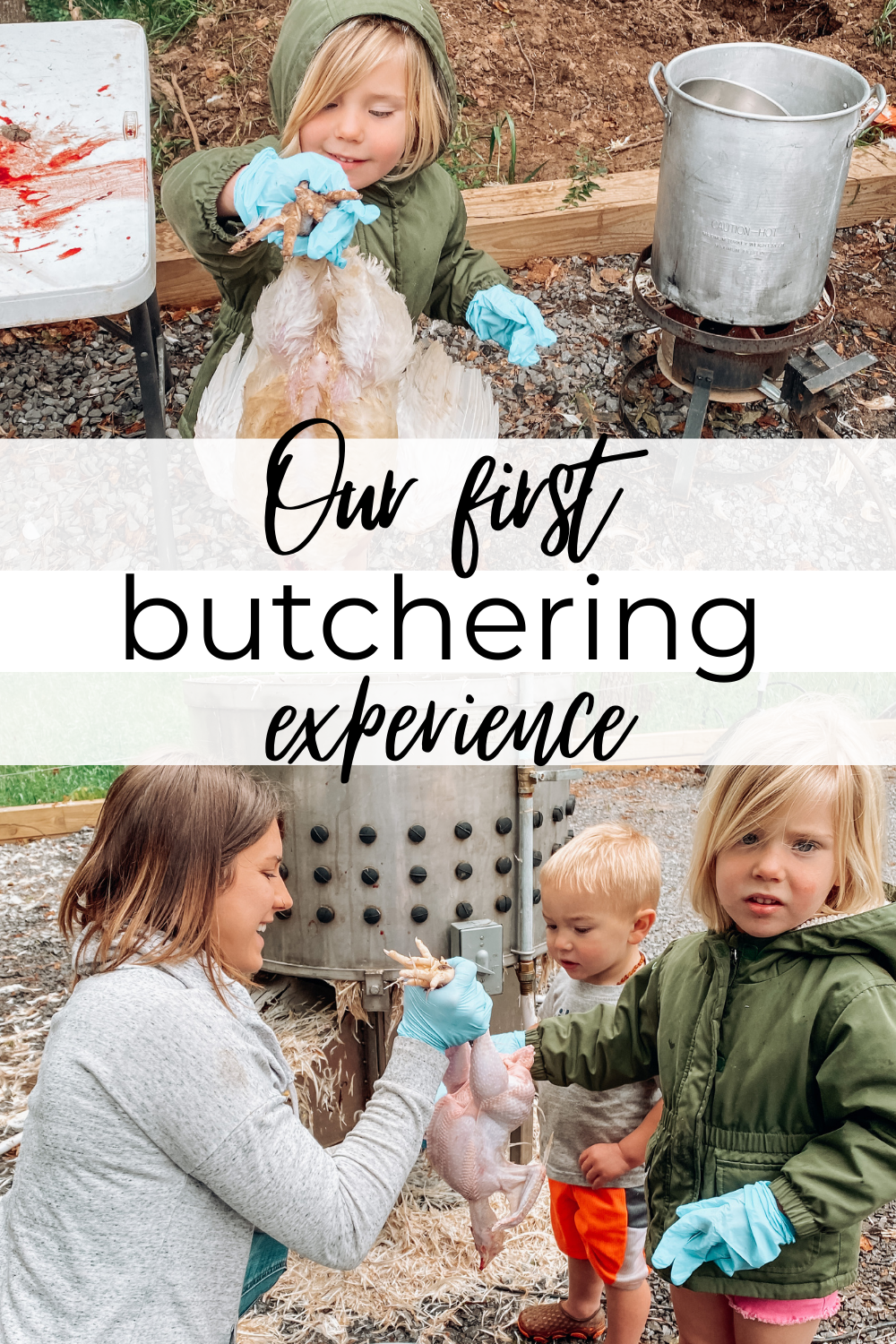 This was our first time experience with butchering.

What led us to our first time butchering our own animals?

Growing up I would have never thought I would be eating duck or chicken or anything like it let alone butchering my own animals. So what changed?

In 2014 my health was hurting at the age of 23. After seeing a holistic dietician and starting a holistic health journey, the way I looked at food completely changed.

My husband and I started eating organic everything and really focusing on where our food was coming from. We also started buying humanely raised meats.

This caused our grocery bill to increase quite a bit but we knew it was worth it for our health. When I got pregnant, my health choices became even pickier because I knew I wanted the best for my child. This made me think about growing our own food. It planted a seed of a dream of one day being able to supply most of our food from our very own land.

Fast forward to 2020 and we (my husband and I) decided to sell our home in the suburbs and start the process of finding land. Now here we are in 2021 with a new homestead, lots of learning to do and some animals that we are raising for our food.

I knew we were going to need to learn to butcher some of our smaller animals to save on costs. We met Mallory and Kyle from Forest Fed Farm and quickly became friends. They had already been processing pasture raised chickens for a bit to sell to local customers. When they offered us the opportunity to learn from them, it just happened to be the perfect time. We decided to take some of our animals to their place and go through the process with them.

Choosing which animals to butcher

I purposely did not name any of our ducks or chickens because I didn’t want to get attached. We had gotten 12 chicks from my sister and brother-in-law and decided we would cull the roosters. Once they were old enough to be distinguished there ended up being 4 roosters.

Our ducks were ordered and shipped to us from McMurray Hatchery. I was able to pick the genders so I had a rough idea which ones I was going to keep and which ones were going to be raised for meat. We bought some Khaki Cambell ducks for egg laying and 7 Pekin ducks for meat.

I wanted to keep at least two female Pekin ducks and one male to be able to hatch our own eggs in the future. That left me with 4 ducks we could raise for meat.

When we decided to butcher.

We decided to butcher our ducks at 8 weeks old and our roosters at 3 months. This just happened to be the same weekend that Forest Fed Farm was butchering their 100 meat chickens. This was the perfect time for our duck meat but since the roosters weren’t technically meat birds, they were a bit on the small side.

Traveling with the birds

I wasn’t super prepared to travel with the birds so I used what we had to transport them. It ended up being two plastic totes with a mesh wire screen on top to keep them in. 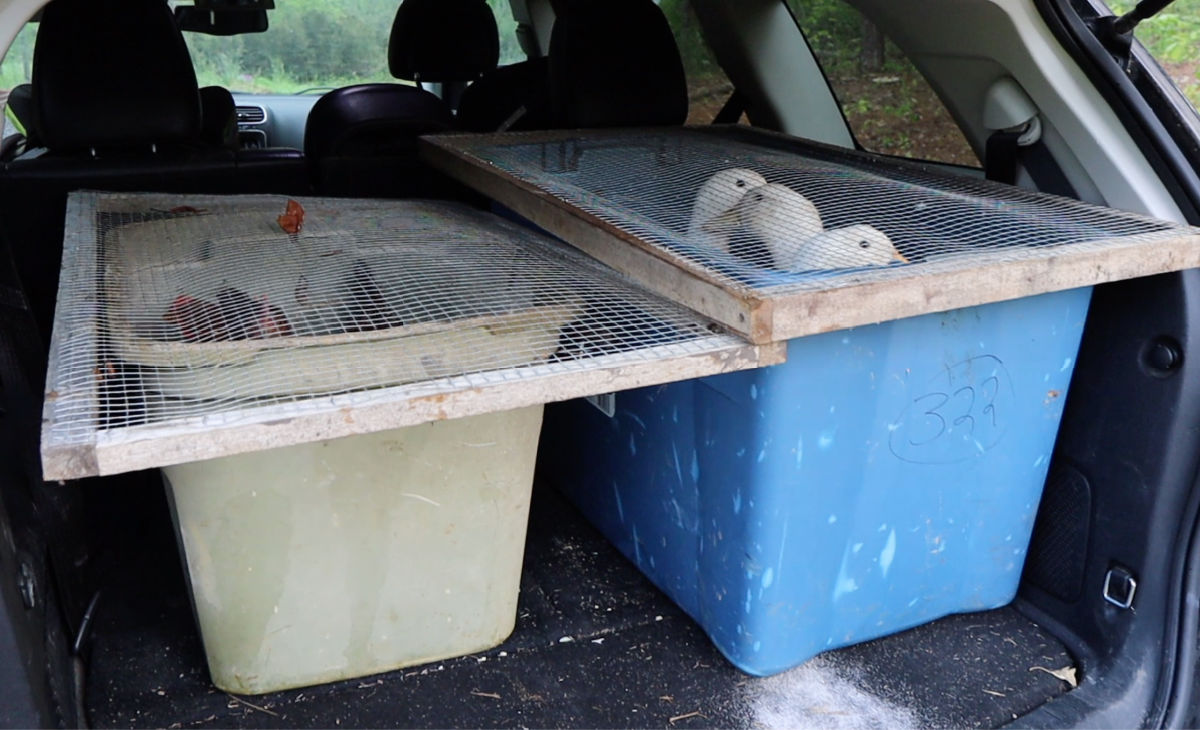 We gave them their last meal the day before processing. The day of we only gave them water to keep things a bit cleaner. Even with that, it was a bit stinky on our way to Forest Fed Farm. I drove our Dodge Journey with 4 ducks, 4 chickens and 2 kids. It was definitely a loud ride as well.

We were a bit late arriving (any mom can understand why) but when we got there they were ready to begin. Our chickens were the first up.

They placed two of our chickens in the killing cone and started the process. I felt a bit rushed and unprepared for the emotions that were welling up inside of me. It was going super fast and I was trying to process my emotions and learn as well.

Kyle asked if I wanted to do it and even though I was tearing up, I wanted to learn so I said, “Yes”.

I’ve learned the most humane way of butchering a duck or chicken is to place them in a cone upside down, slit their throat and let them pass out from blood loss.

The first cut needed to be hard enough to make a big enough cut to drain them but not so hard to cause them to choke on blood. I was so nervous that I was going to cause one of my birds to suffer.

With a sharp knife in hand and while Kyle coached me, I made the first cut. I cried.

After the initial kill

Once the blood was completely drained, and I got a hold of my emotions, it was time to move to the next step.

The bird was taken to a broiler that was about 150º. We held it by the feet and dunked it between 10-30 seconds. After the feathers were easy to pull out, we transported them to the feather plucker. 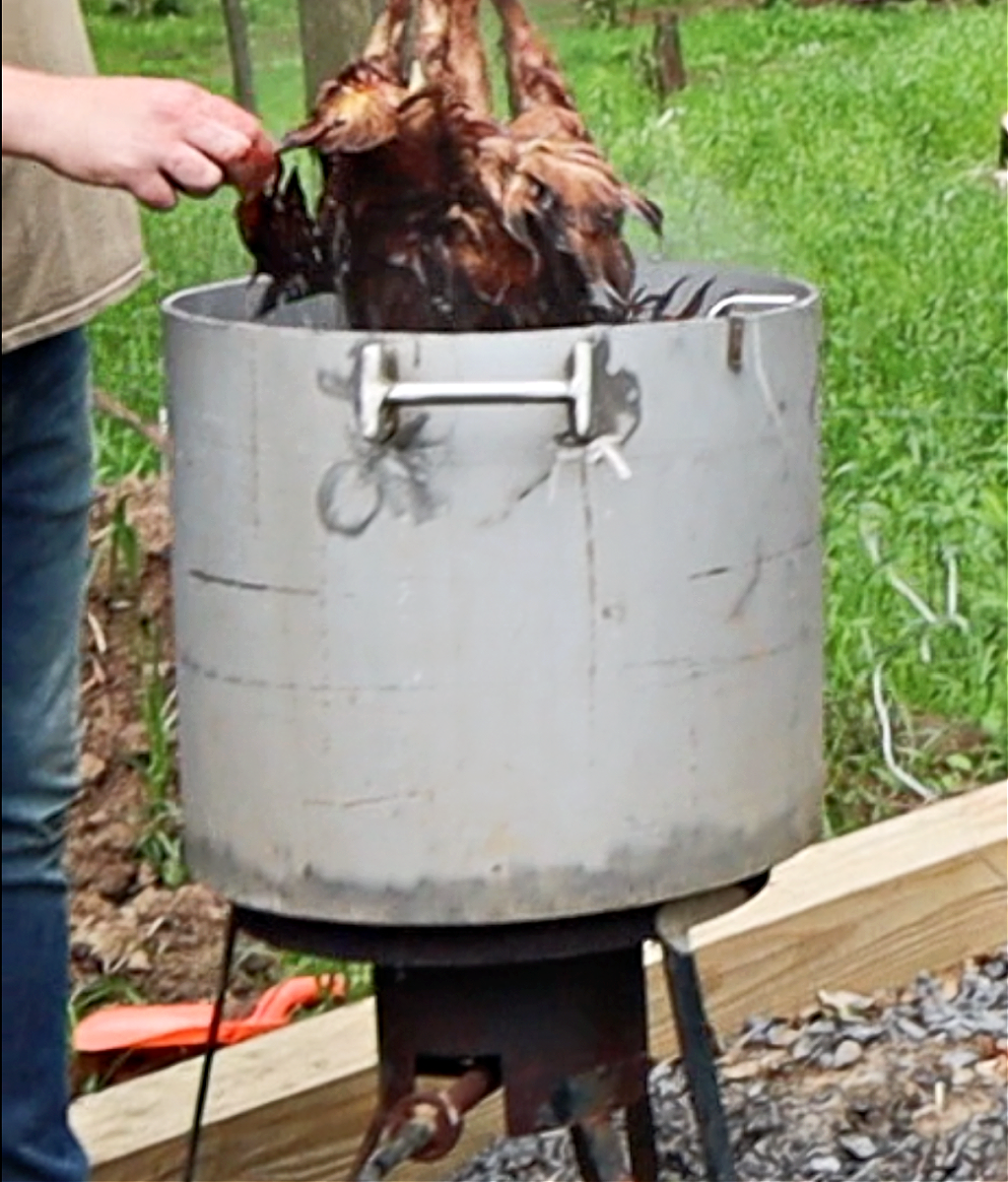 The feather plucker looked like a big washer with rubber fingers. We would place the chicken or duck inside, turn on the water and the rotator and watch it roll. In just a few seconds, most of the feathers were pulled away for a clean bird.

My favorite part of this butchering experience.

Once the bird was defeathered, we moved on to the actual butchering part. This was my favorite part. I was taught how to clean out the bird.

We made piles for different organs, the feet and the heads. I was so excited that we were going to have all of this to make broths and eat for our health.

I felt like I was really getting the hang of it and was able to let my 3 year old, Selah, help me organize the organs. This was a great biology lesson for her as well!

My son, Micah, found his job as well. He helped rinse out the inside of the chicken once the organs were removed.

It was a great learning experience!

All in all, we had a great day learning and the community was great. We plan on raising some meat birds soon so we can have chicken for a year and cut grocery bills.

Everything went great with the butchering experience. I brought everything home and stored it in our downstairs fridge until I had time to make broth and prepare the meats.

The meats were stored in the fridge on Saturday. I showed my husband our work on Sunday. I went back down on Wednesday to start the broth process and found the fridge off.

Our breaker had turned off for some reason and everything smelled so bad. I was in tears because our meat had gone bad.

It’s one thing to kill your animal for food but it hurts bad when it’s wasted.

Thankfully, we were able to go ahead and cook it up and feed our dog and cat with it. I plan on getting an alarm to go on our fridge and freezer to prevent this from happening again.

Have you butchered your own animals before? Let me know in the comments below!

More stuff from “Homesteading with the Hursts”

How to set up a duckling brooder. 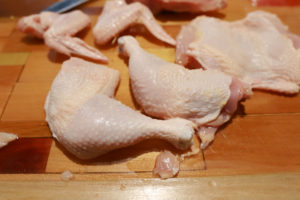 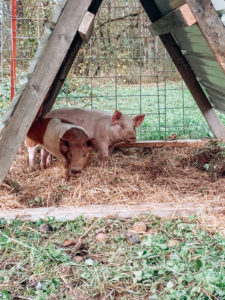